“Tonty gilometers extra sir” he said. The concept of giving extra-something, never settled well with me in all these years. On other occasions I’d have given it the same treatment a playing captain would have given the ‘extra’ in a game of cricket. But this was a nice bloke. We paid up. Gauri and I had alit from the cab only then. Back from a wonderful trip that saw us being setback in the backwaters by a thousand bucks each.

Minutes before, with frantic waving, I had our driver stop at the atm. He misread my hand movements for a right-turn indication and tried barging into oncoming / onto incoming traffic. Traffic we had been running against and dodging through for the last 150 kms or 3 hours. Slow was the vehicle, led partly by the fact that the driver was sleepier than us. The marriage meal had done wonders to his insomnia. The other reason was the stifling heat on the outside which ensured a warm suffocating breeze got into the car and lulled its passengers, and driver, into an uncomfortable sleep.

The stop at Alleppey town on the way back from Ochira had not helped. Bargaining is an art independent of language or dialect and at Alleppey-on-the-highway we were working on a negotiation for coir mattresses. I had a feeling we won the deal, until the point I saw, in the rear view of my mirror, the owner doing a small stretch of Kathakali on the road. He had my money wad in his hand. If not for Alleppey-on-the-highway, we would have had to take a detour to buy those products. Gauri was adamant on buying them. “Coir products and coconut water” she twisted face. “Convoluted world and face” and I straightened it. She manages the project.
The ritual itself was simple. I’m not sure if KC, a Mumbaikar with Kolkatan roots was aware of the sequence of the ceremony. I vaguely remember bidding him goodbye under the arc lights focused on him while he lunched with the extended in-laws’ family. Between banana payasam and semiya payasam, he had that look, which said he wasn’t sure which part of the ceremony indicated the marriage was solemnized. Tricky business dealing with another culture, let alone marrying someone from it. 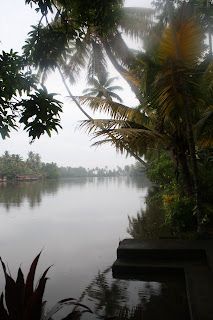 Shot from the host's home

Our camera battery worked along with Murphy and right after the first long distance shot of KC in full-attire, it died on us. He made a pretty picture with his wife. A picture matched only by that of the banks of Nedeseri village, across the Pamba river’s backwaters. 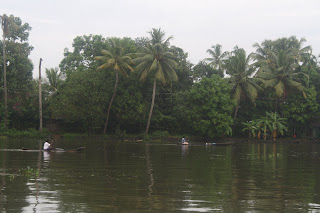 A picture of the village

Rowing through those waters, one only wondered if the people on the banks would look up everyday at the river and the backwaters and appreciate its beauty the way Gauri and I did. Serendipity had brought us there. The journey from our hotel to Ochira, where the wedding was, was peppered with conversations. He spoke of every town enroute and of local legends and fanfare. At Chenganeserry before Alleppey, he spoke of his distant uncle (or was it his friend) who lived by the banks. My Malayalam version of ‘maybe not this time’ with the usual waving of the hands, was interpreted as “Uncle, Uncle, please take me to backwaters no!” There he was, the uncle of our driver, waving at us in a way distinctly different from mine. Car parked a few hundred meters away, the last leg to reach Uncle’s house-on-the-banks was by ferry. What a feeling! 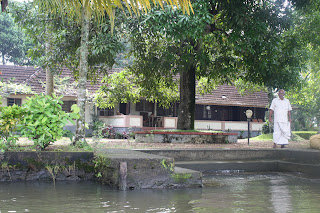 The kind uncle who hosted breakfast for us (at a cost)


Boating up to someone’s home is not something I indulge in always. People in Bangalore take offence to such ideas and the roads are not conducive for boating (and riding if I may slip-in). He served us a Kerala breakfast – healthy mix of puttu (rice flour and coconut puddings?), kadala paya (spicy curry made of some cereal I can’t recognize) and milky tea. I had a couple of breakfasts and noticed Gauri slip in 3 puttu-cakes into her travel bag, and that, after having 2 breakfasts herself. We felt like Hobbits packing lembas. And the backwaters, 10 feet of courtyard separating them from our breakfast table, was going to be the river to ride. Uncle’s friend brought home his little boat. 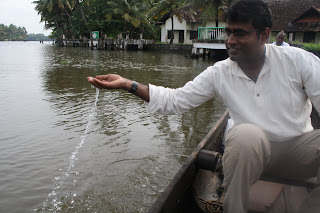 Picking water off the backwaters

At about 20 feet in length and 1.5feet wide it gave us a mild assurance that survival was possible. Once off the banks the “we” changed to “I”. Between the boatman and the two of us passengers, only I could not swim. I could, however, drown with the grace of a heavy stone. The hierarchy of boats, was defined by and defined the status of the families. I wish they realized it still is the same waters they used. Like we land-dwellers use the same roads, pedestrian or Merc-owner. 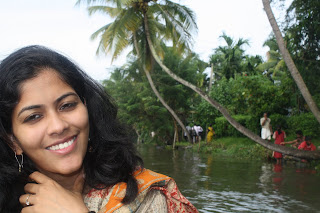 Gauri on the boat


From being in two minds about going to the wedding alone, to the surprise Gauri sprang on KC by inviting herself to his wedding, was a great change. And I’m glad that, that morning of the wedding, we took the very old Ambassador for our taxi, instead of the bus. The weekend that was… and may never again be. A happy married life to you KC, and thank you for falling in love with a girl from Kerala.
Posted by Suri at 12:35 AM 4 comments: Links to this post

Continuing on my series of interesting people on the project site in Valapad, Kerala. 'Interesting' here may not have the same connotation as Steve Irwin or Mata Hari. But I'm the type to draw a silver line on the window while watching war-clouds outside without any linings (silver or otherwise) of their own.

Staying away from home has never been nicer. And large swathes of those niceties, on this current Kerala trip are thanks to Nanni (prounounced nun-ee). A unique list of all words spoken between her and our team is ‘nanni’, hence the name. It took some trial and a lot of error, to conclude that it was the Malayalam word for ‘Thank you’. Being in a completely new place, I was pretty much thankful for anything given... anything that fell in the list of eats or drinks. And Nanni was the torchbearer of them all. Sugary coffee for the lady and self in the morning hours at office, with its assortment of biscuits, to the collection of cashew nuts and syrupy tea in the second half, Nanni ensures our quota of calories is handled right. We face greater challenges in receiving our quota of data from the client. The replenishment model she has worked out for our eating binges, would rival any manufacturing firm’s. Any better and we might make her an offer to join the team.

It took us some effort to arrive at ‘nanni’ as the appropriate word. A quick reference on social networks for a translation, had me misreading the word as ‘ninne’. For the first few days, my thanking her with what I assumed was the right word, drew stares – uncertain ones initially, awkward ones the second week and towards the end of the ninne’s career as part of my lexicography, angry ones. Those 3 weeks had a phased approach of its own. Serendipity brought home the real meaning of the word – ‘ninne’ meant ‘you’. If I were a heart-warming coffee-cashew bearing person and am greeted with “you!!” twice a day for a job well done, I would have not been happy either. Nanni was no different. It took only one word from the client project manager to her, to take proper care of us, to get her up to speed. The final report shall have her being acknowledged too. Just below the client project manager but well above the chairman.

With a nanni in every project, I would take up any outstation project with little thought. Now, if only my manager would stop accusing me of having other intentions regarding the elderly nanni.

Posted by Suri at 11:16 AM No comments: Links to this post