Settling down in the 20 seater wasn't a comforting thing. A bus with 20 seats has its own charm. It makes you want to look at the running scenery to the right and left of the road, maybe start a conversation on advanced knitting techniques with the elderly lady ahead. Its not the same if the 20 seats are a part of an aircraft one of which you will occupy for the next 2 hours. With those thoughts, I boarded the flight, with 4 others from the team - 3 from the client and one other colleague.

A few freefalls @ 30k feet later, we had arrived at Hubli airport - square feet larger than a 3bhk in Mumbai and a lot more airier. The team tread straight away to the jeeps waiting to take us to our destination, the manufacturing plant. 1.5 hours of driving through amazing roads (newly laid out said the client, and surely not for us) and there we were. From what little we had gathered from our representative within the client team, we understood the person we had our day-long discussions, and 1/5th of the traveling party was not the easiest to handle. A grimace and a quick scratch of the stubble later, I joined the team at the supper table. Cooked by the women from Shirhatti, the village 3 km away, which is also from where 60% of the workforce comes from, the supper was worth a grand banquet. Simple in its approach, yet poetic in nutrition.

Our host, a technocrat in his own right, was one with nature, and as he mentioned, in the earlier days of factory, also two with it through the pond nearby. A small banana plantation defined the outer boundaries of the factory, rather unconventional and certainly an eyebrow-raiser if the eyebrow belonged to an EHS auditor. My colleague, who with the enthusiasm of a 3 yr old faced with the prospect of his second candy, ran into the last room adjoining the paddy fields, quickly bucked out of it. Reason - the host with the most mentioned how bats in the middle of the night, blind as is their wont, tend to knock around the windows of the last guest house. I willed myself into the room, left with no choice than that of the weakest kid in the playground paired with the bully by the monkey-pole.

Technocrat himself deserves a plantation full of praise. The factory, unlikely of a large organization as the one I work for (with?), made up for what it lacked in the form of great manufacturing facilities, with the fantastic bonding with nature - all thanks to T. T had most things barring the bare skeleton of the guest house facility, made out of bamboo. Solar light funded the nightly ration of electricity, and strategically placed bamboo covers around the lights (LED, mind it!), hightlighted the curves of the places, boulders as they were. A pond, 20 feet deep and a 100 feet wide was the destination of most rain water in the vicinity. The morning lights had me up in a jiffy, not because of my excitement towards a new place and a new morning but because I didn't sleep at all that night, down with a massive cold. Like Rudolph on morning duty I strolled out of the room and sat myself by the pond. The caretaker brought me my cuppa and I sat there appreciating the laziness of the pond heron, the ibis and their fellow feathered friends. An SLR would have done great justice but the birds themselves seemed media-shy. I very nearly managed to snap a kingfisher in her out-of-bed look but my 3.1 mp phone-camera was no match to his speed. 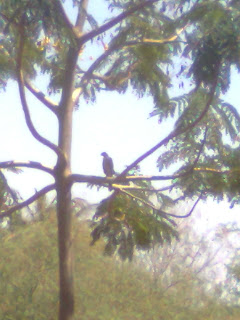 What I claimed was a baby-eagle, right above our pond (not in photo)

We forgot our purpose of the visit and when T offered an early morning drive to the 12th century Shiva temple nearby, we jumped onto the bandwagon and into the wagon. 10 km of a country drive, interspersed with T's now echoing "THERE's a pair of hornbills" by Magadi lake, which left the hornbills sour and us broad awake were well covered. Its the only place in India where Shiva and Parvathi appear in a human form, riding their bull Nandi, remarked the priest. He also mentioned that he's a direct descendant of the priest who first performed the rites at the temple in the 12th century. Fascinating stories. T's excitement in showing us the architecture of the temple cost him his footwear. The kids nearby had made a nice walk out of it. One of us remarked how its considered lucky to lose footwear in a temple. T's response that they weren't his had me giving him only 50% of the luck as a consolation for best-effort in being callous - he had parked the footwear at the east side of temple, compared to the standard protocol of the front entrance. 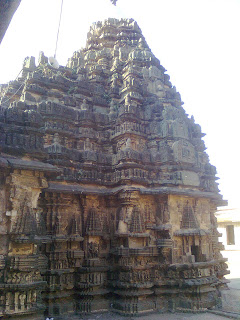 A shot of the 12th century temple, 8 centuries late 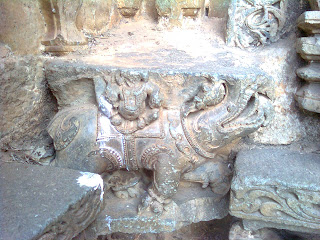 Mythical creature with the face of a crocodile and the body of a bull. My references to it as Rhino-san fell on deaf ears

The return and quick change of clothes to business formals, hypocritical as it seemed saw us finishing what was a really long day. Great business-cum-pleasure trip in all. My only regret - not negotiating with T, a stay-on-arrival arrangement even after I disengage with this client and not interacting with enough bats the second night.

PS - I've read somewhere that blogs are dead and passe. Doesn't stop me from writing here. Calling this a revival of the blog is akin to saying the Dutch are back in action in the World Cup - cricket. So let the remarks flow and hopefully, I'll rush back for another write-up, right up
Posted by Suri at 10:27 AM 5 comments: Links to this post