Back to the Gym - 25 Sweaty bodies and one single room

Now that I'm back to Bangalore, I thought I'd do something about my 20th birthday pledge of strolling towards a physically fit body. 'Strolling' as in working out for only half the time I spend in the gym. 'Physically fit' as in capable of breaking my previous personal best on the 80m sprint i.e. doing it in less than 16 seconds (Note to self - blog about how I set the record and conquered the world, all in one not-so-quiet evening).

Its only in the fairly recent past that I had quit the gym after spending 2 back-breaking, gym-instructor-abusing months at Crunch, Hyderabad. Readers, kind to note previous blogs about the experiences and escapades there. By the time I had quit Crunch, I felt no trace of laziness anymore and spelt it C R U T C H. The new spelling, I deemed, over Sulaimani chai, was more apt to my state after working out there. Excuse me for the flashback, but please to understand the emotions are high! Cut to the present? OK (bad music rolls in the background, a quick shot of the empty skies taken at 160 frames/sec, blurs past).

From time immemorial, peepal trees have been great places for discoveries of the spiritual kind. For more physics-oriented ones, Newton recommends apple trees (either ways, don't stand too long under coconut trees). It was under one such peepal tree, where the benched in IBM met up at regular intervals, that I made my all-important discovery - the gym at office was well-equipped and was free. Joy knew no bounds and I could feel the pectoral muscles sending neuro-muscular greetings to the biceps and triceps (the latter, merely a fledgling and incapable of comprehending the gym thingie). After a 3 day hiatus from office, I had taken the concrete decision of working out regularly in the office gym from Monday onwards. The day had arrived in all its glory today morning. Birds chirped near the window sill, smells from the neighbouring kitchens played pot-pourri and wafted through the windows, the alarm went off and without wincing a bit, I euthanized it for some more sleep. Today was going to be my gym day and I had no intention of starting by waking up early. Bejan Daruwalla in his recent advise for my star sign had strongly suggested I wake-up later than usual for the coming 15 days. With a name like that, you better respect him.

Around 5:30 pm, after a hectic 12 hours of work (fingers crossed behind back), I headed to the gymnasium eager to greet all the equipment awaiting my arrival there. A tidy crowd of 5 had stepped in already, along with the 2 instructors. A word about the instructors now. As kids, a good number of us might have, against parental advise, watched something called WWF (later called WF - wrestling federation). Any recollection about this brotherly-duo of Mabel and Mo. Do refer to the picture below for a quick jog of the memories. Else, don't bother. I might have exaggerated a bit around the waist areas I think, but honest to Hulk Hogan, my instructors couldn't have been too far from the photogenics ones below. 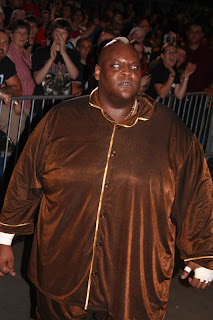 Mo (the smaller of the instructors) greeted me with a pleasant 'yes, sir' and led me to the cycling machine. I cycled and I cycled, what with the Tour de France going on and all that. With not much of an Indian presence around the Alpine stretches where the tour is headed to, I thought it was only fair that I do my bit from the hometown. 15 minutes later, the calorie meter had shown a clear 135 cals. Exactly 2.5 km had been cycled away. If the cycle had real wheels, I could have made it past Baldwin's High School by then I think. Patting one's own back is a good form of motivation, though in the gym, it needs to be carried out quickly and surreptiously, lest someone laughs their butt off at the act. No one spotted my 3 second version of it. Between the two instructors, I figured Mabel looked at himself as the better of the two when it comes to women. He would be there to help every single female form in the gym, conveniently ignoring its male patrons. Not that it made a difference to us. I kinda figured out that most of us men, were keen on lending a helping hand to the more curvy equipment in the gym.

In the meanwhile, the instructor who had guided me to the cycling equipment (Mo from the WWF), decided to put me on some freehand exercises. The kind that has to be repeated in sets of 15, three or four times and gives you that distinct feeling that you're an elephant at Banerghatta National Park and under high amounts of stress. No bananas there I think. His instructions were fairly simple and contained a lovely paradox - "For any freehand exercise, simple rule is to exhale when you are putting effort and inhale when you are not". Now now, does that sound alright! I am the kind who puts in an effort Always! So if I go about doing the exhalation part of breathing, when do I inhale? Would I have to recruit someone to do the inhalation part of it while I go about exhaling? I wanted to seat Mo and explain the problems I had at a personal level with his ideas of my continuous exhalation. A PYT walked past and he headed off in her direction. Apparently he wasn't concerned about me. Wasn't long before the tiny gym had about 25 people trying to work out on all equipment simultaneously. Pretty much like a scene where Vijaykanth gets attacked by 25 rowdies and he manages to beat the daylights out of all of them. Except, I'm certainly better off than Vijaykanth on the shape-front and the rest of the people work in the same company as I do.

I was kinda sure that it wouldn't be long before 2 people start running on the treadmill simultaneously. With fear of being asked to do that myself, I headed out in silence, whispering a goodbye to Mo and asking him to convey the same to the other instructor. "4 times a week minimum for you" he whispered back.

Tomorrow is a new day and in solemnity I request, you my friends, my physically fit well-wishers to motivate me further on heading back there. Else, I'll have to fall back on the 20th birthday pledge for sometime now.

PB - The picture above is of Mabel; Mo's picture, sadly, was unavailable. Apologies.
Posted by Suri at 6:58 PM